Orangeburg County School District (OCSD) administration shared a potential facilities plan with trustees on Tuesday, which included combining resources to ensure high-quality learning environments for all students. The proposal followed a series of more than 60 community meetings in which District administration shared the results of independent facility and demography studies and reflects the solutions shared by many stakeholders who responded to a survey with their ideas and recommendations.

Over the last 10 years, Orangeburg County’s population has dropped nearly 9% and less babies are being born. Students are occupying just 39% of the total seat capacity district-wide. The district’s enrollment is forecasted to continue to decline, and energy costs just to turn the lights on at each of the county’s 32 schools is $3.1 million annually. The board voted affirmatively tonight to join the administration in bringing forth for further community input a potential solution to underutilization of schools as well as school facility repair costs estimated to exceed $429 million.

The first proposed solution includes expanding grade levels served at Lake Marion’s campus in the eastern area of the county to serve students in grades Kindergarten through 12. Students currently served at underutilized campuses including Elloree Elementary, St. James-Gaillard Elementary, Holly Hill Elementary, and Vance-Providence Elementary would continue learning in their current location until August of 2024, when their new state-of-the-art campus would open. If this proposed solution is supported, design of the new school could begin as early as March 2022 with a tentative groundbreaking and construction beginning in February of the following year. 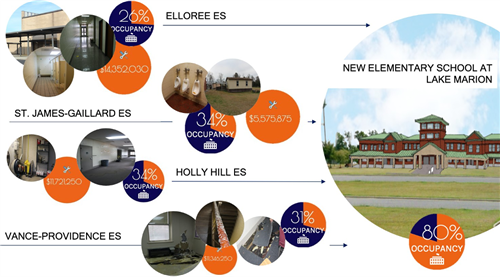 Additional upgrades to the eastern area of the county include a proposed middle school wing being added to Lake Marion’s campus. If supported, construction could begin in February of 2023 for this 20-classroom addition and open in August 2024 to learners from Holly Hill Roberts Middle, currently at 32% occupancy and in need of more than $19 million in repairs, and Elloree Middle, with 26% occupancy and over $7 million needed in repair costs.

The proposed solutions for eastern area schools were derived from input received from employees, parents/guardians, and other stakeholders, many who responded with recommendations to build a new facility for elementary and middle school students in the east.

“The purpose of the consolidation was to pool our resources together and provide a good education for the students in Orangeburg County, including better school buildings,” one survey responder commented. “Closing some buildings was what we expected given the decrease in enrollment. My suggestion for the East is: Vance-Providence Elem. merge with Elloree Elem., St. James-Gailliard merge with Holly Hill Elem. and move Holly Hill-Roberts and Elloree Middle schools to Lake Marion H.S. campus. This would eliminate our teacher shortage and money for the operation and maintenance of 3 buildings.”

Although Orangeburg-Wilkinson High School is not the oldest of the district’s campuses, the condition of the school is among the worst, according to the studies. Construction of a new Orangeburg-Wilkinson High School to meet the needs of future students in the central area of the county was administration’s second proposed solution. A proposed rendering of the completely new campus details space for 1,600-1,800 students and includes a dedicated front entrance, gymnasium, adequate parking, and athletic fields.

Building new state-of-the-art facilities instead of dedicating limited funds to repairing buildings that can’t be sustained long term were some of the comments shared as stakeholders reflected on proposed solutions.

The current Orangeburg-Wilkinson High School needs substantial repairs at an estimated price tag of nearly $54 million. Unfortunately, even with an investment of that magnitude into fixing the existing facility, architects cautioned district officials about the projected life-span of the building itself.

If a new O-W is supported, administration aims to complete site selection by August 2022, break ground for the new high school in February 2023, and open in August 2024.

Overwhelmingly, survey respondents shared their support to combine smaller schools and close the ones that need the most work. Just two schools in the District, Rivelon Elementary and Edisto Primary School (EPS), exclusively serve early learners in Pre-Kindergarten through Second Grade. Rivelon and Edisto Primary, both underutilized, have bordering attendance lines.

Administration’s next proposed solution is to complete minor renovations at Edisto Primary School and transition Rivelon students to EPS. Combining the student population from those two campuses increases Edisto Primary’s occupancy to 65%, allowing for hopeful continued growth in enrollment.

Additional proposed changes to schools in the central area of the county include construction of an additional classroom wing at Clark Middle to serve all middle-level students, and renovating and repurposing Howard Middle for Elementary Learning.

Originally constructed as a high school, Clark Middle is a large, comprehensive campus. Recent upgrades to Clark have included roofing, windows and painting, as well as an exterior fence to enhance safety. With a proposed addition of 28,312 square feet, Clark’s campus could be home to all middle-level students throughout the central area of the county, including those within Clark’s attendance zone and students previously zoned for Howard. Should the community support this proposed solution, the new wing would tentatively open at Clark Middle in August 2024.

Transitioning Howard students to Clark Middle allows for an additional proposed solution with central area elementary schools. With repair costs exceeding $18 million, $9 million, and $6 million, respectively, Whittaker, Brookdale, and Mellichamp elementary schools, all within a four-mile radius of one another, would, if this solution is supported, close in June 2025. Extensive repairs to Howard were recently completed, and after a year full of renovations, likely to include carline stacking and transitioning some classrooms to serve early childhood students, the new Howard Elementary would open to students in August 2025. 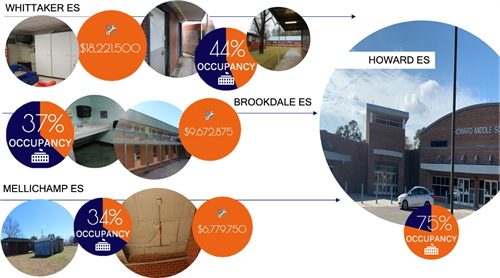 Other proposed solutions include Athletic and Fine Arts updates across the county such as astroturf and scoreboards at high school stadiums, improvements to baseball/softball dugouts, and upgraded lighting, sound and seating in auditoriums.

As part of the next phase of Community Meetings, District leaders will be exploring with stakeholders potential reuse opportunities for vacated facilities.

“One thing that we cannot and will not do is leave an abandoned school up as an eyesore in this community,” Superintendent Foster promised.

Through public private partnerships, Foster says he hopes to see schools or portions of existing schools repurposed for other community needs.

“Some of the facilities proposed to be closed have areas that may be of interest for community reuse, including gymnasiums, cafeterias, kitchens, libraries, playgrounds, and meeting spaces,” Foster continued. “We look forward to ideas from the community surrounding fitting reuse opportunities for vacated facilities, and we will budget for any partial or full demolition costs that may be needed.”

The proposed timeline for transitions, consolidations and renovations targets the year 2025 for completion.

“This timeline, we believe, gives time for transition,” Foster stated, “and demonstrates our District’s commitments to being good stewards of taxpayer dollars by not continuing to utilize limited funds to operate and maintain more school facilities than are needed for our existing and projected student enrollment, while also ensuring high-quality learning environments for the students we currently serve and hope to serve in the future.”

In what District officials are calling “School Improvements of Pride by 2025,” a Bond Referendum on the General Election Ballot in November 2022 is proposed. The referendum will allow voters to consider a $190 million bond, which, if supported, would allow the district to advance funds for school improvements at consolidated schools, without an impact on taxes.

Because South Carolina School Districts do not receive funds for facility improvements, school systems are permitted to borrow 8% of the assessed property value for campus maintenance and upgrades. The referendum would allow the funding the District will receive in smaller amounts annually over 20 years to be available to address current needs.

District Administration plans to share these proposed plans first with teachers and employees for their feedback in early January. Small group presentations will be held from January 24-February 11. Civic, faith, volunteer and other organizations who wish to schedule a Small Group Presentation for a closer look with District Administration are encouraged to email public.relations@ocsdsc.org for a meeting time. Community-Wide Meetings are also planned for February 15, 16, 22, 23 and 24.

Orangeburg’s Board of Trustees anticipates reviewing community input to determine any next steps to the proposed solutions at its March 8, 2022 meeting.

You can also download (& print) the press release by clicking on the words "Facilities Proposals".